Volgarr the Viking and the 2D Gaming Renaissance

There are a lot of games which make use of retro-style, big pixel graphics, but which are nothing like those which appeared on true 8 and 16 bit gaming machines of the past. Fez is one such game. During the interminable wait for this game’s release, it grabbed gamer’s attention through its vibrant retro aesthetic, demonstrating pixelated worlds that captured people’s imagination. The actual game however is one of extraordinary originality and creativity, filled with not just amazing pixelated vistas, but also mind expanding environmental puzzles of a type rarely used in game design. Another example is FTL, which uses relatively simple graphics to convey your epic journey across the stars to thwart your rebel pursuers. The gameplay, on the other hand, is a fluid real time strategy survival setup of which no analogue exists from the days before IBM PC became the standard. 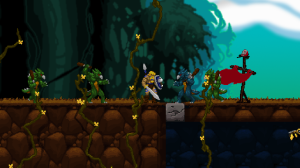 One game I’ve been playing recently that tries hard to be true to the games of the quainter era, not just in style but in spirit, is Volgarr the Viking. An action platformer similar to something like Rygar or Rastan, its sports the obligatory big pixel graphics (although for some reason a really gross filter is on by default, which makes everything look like a smeared MS Paint image.) It also tries to be as nails hard as some of these older games, with limited health pickups and only one checkpoint in each world. Enemies and obstacles are fiendishly placed, as the game is unrelenting in its goal to see you die. And players will die. Over. And Over. And Over.

But in its obsession with retro-styled difficulty, Volgarr betrays its modernity. The remorseless death gauntlets of Volgarr have a level of planning and thought that was almost nonexistent in its poorly designed 8-bit counterparts. There is nothing cheap or unfair about Volgarr. As you die over and over, it will become apparent that every obstacle and every enemy can be overcome with the right move and the right reflex. Each level begins utterly intimidating and seemingly insurmountable, but with patience and astuteness, you learn its ways. And after more deaths than anyone would care to count, the level becomes instinctual and you barrel through it with far greater ease. Then you defeat a boss, and the whole daunting process starts fresh in the next level. But as long as you hone your skills, the game will eventually yield. Thus there is a quality to Volgarr’s level design that was uncommon in the Master System and TG16 games from which it takes inspiration. Games like Rygar, Rastan, and Shinobi were mostly cheap and borderline unfair, requiring some level of luck over skill to manage your way through things like poor collision detection, finicky respawning enemies, flickering sprites and slowdown, etc. Game design was just a little more crude in those days. We enjoyed it though, because that’s what we had at the time. Volgarr, on the other hand, is a far more polished experience.

And that’s okay I think. There is an idea that I feel is all to commonly held that modern 2D games exists just to feed a desire to recapture nostalgic experiences. And I think that’s a terrible way of thinking. I think the possibilities of modern hardware and the openness of digital storefronts should be taken advantage of to create new experiences, not desperately reconstruct some bygone ideal. Loathe as some people would be to admit, modern consoles like the 360 and PS3 are superior 2D gaming machines to the likes of Super Nintendo and GBA. The high resolution output of modern machines allows not just for a prettier image on an HD display, but also a greater density of detail to be invested in the game image. Games like Super Meat Boy, which is based upon a tiny character frantically hurling himself through an imposing gauntlet of obstacles in near full view to the player, or Fez with its minutely detailed environments would not have been possible at low, early 90s resolutions. Further compare movement in a game like Super Mario World to that of New Super Mario Bros. Wii or Rayman to Rayman Origins. Modern processors allow for fast and fluid movements, which didn’t exist in the relatively stiffer platformers of the 90’s (the arguable apex of popularity for 2D platformers).

I feel like there is a 2D gaming renaissance going on right now with so many exciting new ideas like Super Meat Boy, Spelunky, Rogue Legacy, Don’t Starve, and Mark of the Ninja to name a few. There are way more ideas in this arena today than there were in the years when everyone was trying to clone Mario and Sonic’s success. Yes, 2D games are almost nonexistent among games that come in $59.99 boxes, which is a point that some people out there get really hung up on when talking about the quality of modern 2D games. But I personally see no reason why digital titles should be considered less valid than those placed on store shelves. It’s true also that some people have accused big pixel graphics of being a gimmick used to bait people’s nostalgia. While there are some games that do rely on retro-aesthetics to try to overcome insipid gameplay, I feel that’s far from a universal case, and it can be a perfectly valid part of a creator’s honest artistic vision.