With October here, I’ve decided to devote myself for the month to playing through a list of horror games I’ve been meaning to play but haven’t gotten around to yet. Horror games are interesting in that they run contrary to the grain of most gaming experiences. Most often, the player takes on the role of a hero that is powerful, fearless, and indomitable, usually a one-man walking army that can take on an entire legion of enemies all on his/her own. In a horror game, on the other hand, the player character is often meant to be confused and vulnerable (or at least feel that way) with regards to the oncoming threats so as to facilitate suspense and tension. I think that contrast is what makes horror games attractively unique in the world of gaming.

The first game up on my backlog-clearing list to knock out is The Last Door. The Last Door is an episodic point-and-click adventure which began (and is still available) as a free flash game via the developer’s website and is now also available in a purchasable “Collector’s Edition” through Steam. As of the time of this writing, the first season of the game is completed with the second season arriving soon. Set in late Victorian Era England and Scotland, the game focuses on player character Jeremiah Devitt’s investigation of former schoolmate Anthony Beechworth’s cryptic death. Devitt quickly links the events which initiate the game to the occult experiments he and his circle of friends performed as teenagers. If one were to ascribe a specific horror genre to The Last Door, it would likely fall in line with a similar category as the writings of Lovecraft, focusing on strange supernatural intelligences whose nature comes across as utterly alien and cosmic. As a game, The Last Door is fairly slow-paced and places a heavy emphasis on building cryptic mysteries rather than violent confrontations with malevolent enemies as would a conventional survival horror action game. This is the type of point-and-click adventure game where there’s no way to die. Yet despite this lack of direct danger to the player, the developers succeed quite well at building dread and tension. Mainly, this atmosphere is achieved in the excellent sound and graphics design (more on that below) as well as several well-placed scenes and story moments that come across as truly disturbing and spectacularly alarming. There are also just some good old fashion jump scares. It is very much a story-driven, rather than mechanics-driven, experience.

The first thing most people will notice about The Last Door are the striking, retro-modern, big pixel graphics. These are the type of pixelated graphics that evoke the pre-polygonal era of gaming without actually looking anything close to what pixel art of that time was like (or was capable of). Some might shirk away from this aesthetic stylization, as it has become arguably overused in the realm of indie game design, but I think it’s quite appropriate for The Last Door. There was a time not too long ago when I thought that advanced graphics were necessary to create the atmosphere required by horror games, but recently games such as The Last Door and Lone Survivor (another excellent pixelated horror game) have changed my stance. Pixel art allows for a level of abstraction of the forms it’s presenting that challenges the imagination of the player. It has sort of the same effect a lot of horror movies are going for when they only show monsters (or killers or whatever boogey man is involved) in obscured shots because revealing the monster in full detail would take away its mystique. The fear of the unknown is far more powerful than the fear of the intimately understood. The abstracted, pixelated graphics of The Last Door evoke this effect as they create a barrier of perception that forces the player’s imagination to run wild with fear of the perplexing but also somewhat recognizable visuals of bewildering supernatural horrors.

The gameplay of The Last Door is fairly in line with the standards of the point-and-click adventure genre. It is more like Monkey Island than a modern Telltale-style point-and-click game, as it tends to focus on inventory/item and dialogue puzzles as opposed to being a sort of interactive movie that eliminates most of the challenge and “gamey” aspects to focus on efficiently delivering a narrative experience. I found the difficulty level of The Last Door to be just right, though. The puzzles are not particularly easy to solve, but they aren’t really as show-stoppingly hard as some of the game’s old-school counterparts. I got stuck on a few puzzles, but never long enough that I had to run to GameFAQs for help. And throughout disentangling the mysteries of The Last Door, the wonderful atmosphere of dreadfulness, dismay, and apprehension never lost its grip.

One last thing I would like to mention is how awesome the music and sound design in this game are. With the aesthetic design being what it is, you might think that The Last Door would go for chiptune style music, but it actually goes with a far more moody and impressive classical score. I was really impressed with the music employed here, and the soundtrack was a vital piece of the game’s presence. The sound effects and design were also incredibly spooky and largely and effectively unnerving. 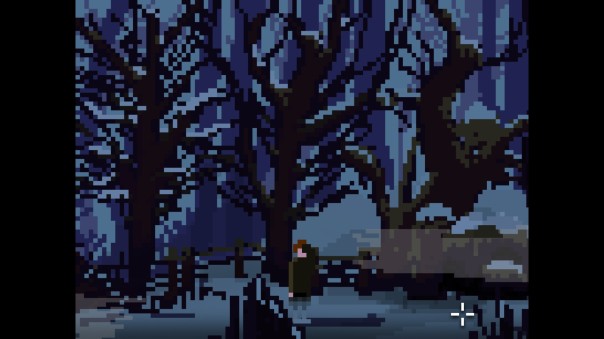 This is a very light *SPOILER     *, but, in the end, the only real problem I had with The Last Door is that its story is not completed in the final episode. Instead, the final episode ends with a set-up for the planned Season 2 which is already being advertised on the developer’s website and will hopefully begin arriving soon. Regardless, I still highly recommend The Last Door to fans of more unconventional and unique horror games (i.e., not typical survival horror action games) and especially if you happen to be looking for a good point-and-click adventure game with an emphasis on well-designed puzzles.