I’m not the biggest follower of the GTA series.  Outside of V, the only other games in the series I’ve played are GTAIV on the 360, which I liked well enough, and Chinatown Wars on the PSP.  Chinatown Wars actually may be my favorite PSP game, but it really isn’t representative of the rest of the (modern) series.  I think I wasn’t all that interested in GTAV, because Red Dead Redemption never clicked with me.  I know that game gets enormous praise from all corners, but I just didn’t get very far into it for reasons that I find hard to articulate.  While I missed GTAV for both the last gen and new gen consoles, I recently made some serious improvements to my PC gaming abilities and decided to use the new PC version as a test for my machine.  I’ve put almost 25 hours into the game so far, and I thought I’d share some of my thoughts on the game. 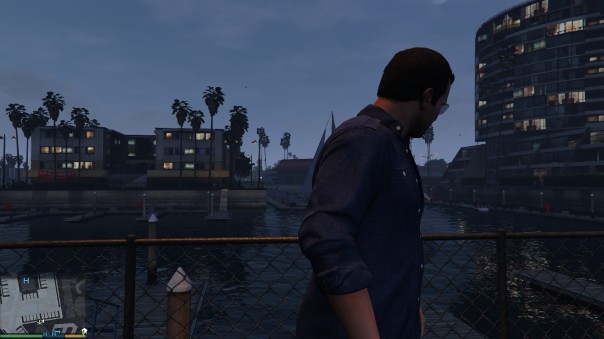 With my new video card in mind, the graphics were naturally the feature I was most curious about.  At first, I was a little underwhelmed, thinking to myself “Yep, that’s what a 360 game looks like.”  But as I played the game more and more, I found I had a growing appreciation for the visual qualities on a technical level.  While the game might not have the most elaborate 3D models of humans, cars, buildings, foliage, etc., it is incredibly good at environmental and atmospheric effects.  There are times like when it’s raining at night or when the sun is setting on the city, that I’m just taken aback by how well they’ve recreated the feeling and mood (for lack of better terms) weather conditions can have on a place.  It just feels realistic, and I never feel like applying that term to video games.

As I mentioned, my attitude toward the game’s graphics as a technological accomplishment has improved a lot since I first started playing.  With most games, I think the reverse happens.  I’m initially impressed by the visuals, but as I continue to play, I notice more and more little visual imperfections.  With GTAV, on the other hand, I think it’s taken me time to fully begin to notice all of the fine details and polish (such as the weather effects) that have gone into creating the massively complex virtual world of Los Santos.  It’s not the best looking game out there, but I can’t really think of any other that has this same scope.

Speaking of fine details, I shudder to think what this game might have been like on last gen consoles in sub-HD.  If ever there was a game that benefitted from rendering at high resolutions, GTAV is it.  I tried playing via in-home streaming on my Nvidia Shield tablet (yes, I am like one of the 5 people in the world that own that device), but the loss of resolution due to the video compression really turned me off from playing the game that way.  Higher rendering resolution means that details further off in the distance are clearer.  And in a game world this large, especially when you get up to high speeds in a vehicle, being able to clearly see what lies far up ahead is really crucial.  I think this is a massive advantage of the PC version, and probably the next-gen console versions as well.

As I mentioned above, I’m not a close follower of the GTA series.  I think my biggest issue with these games is the gameplay.  Superficially, GTAV is a heist game, but like the games that came before it and Red Dead Redemption, it’s not really great at being an action-shooter game or being a driving game.  I think that’s where my indifference toward the series arose.  But as I play GTAV, I think I realize that it’s not the action or the high speed driving that really draws in the massive audience that the game possesses, rather it’s just the insane level of detail and polish that has been put into creating the city of Los Santos and the surrounding areas.  It’s really more about the immersion of the intricately-realized, twisted facsimile of the real world that the game presents as a sandbox to the player.  In this way, it’s more like Minecraft then an action-focused open world game such as Far Cry 4.

A lot of the missions don’t even involve any action.  There is an entire quest line devoted to towing cars with a tow truck.  You just drive out to a car and tow it back to a garage or impound lot with no further eventfulness, you don’t get attacked or anything.  There is definitely a big focus on introducing novel and varied vehicles and heavy machinery to the player during missions.  One mission involves parachuting from a helicopter to join a bike race through the mountains, another has the player moving around shipping containers with a giant crane, and there are more examples.  Those are such weird things to have in what is ostensibly an action game.  Again, I think the game is really more about creating a big virtual sandbox than being some sort of profoundly well-designed TPS.

I’ve heard the setting of GTA described as both satirical and hyperreal.  I don’t know if either of these terms are really that accurate.  The “satire” in the game is really nothing more than just extreme caricatures of familiar real-life people or organizations.  I wouldn’t call it particularly clever.  Rather, I think the way the game turns everyone and everything into extreme-ified versions of themselves is really just meant to make the player feel less guilty about the reprehensible characters they play as.  When everyone in the world of Los Santos is so awful and cartoonish, Michael, Trevor, and Franklin don’t seem (quite) as bad for doing the things that they do.  I mean, don’t get me wrong, these are terrible people you’re playing as, but in such a transparently morally bankrupt world, they sort of fit in. 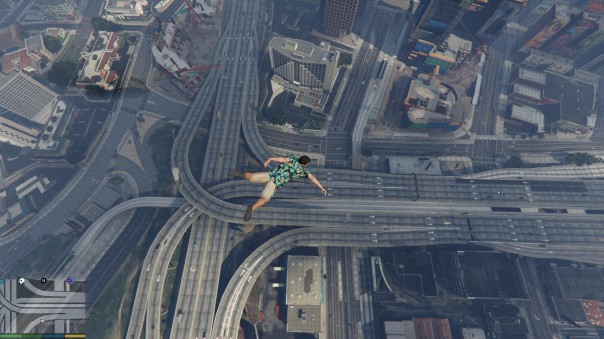 Speaking of the characters, the story I think is okay, nothing particularly unique or interesting.  These games get a lot of praise for their stories, however, I just don’t feel like there’s much there in the way of character development or narrative metaphor.  Honestly, though, those features are something the vast major of “good” video game stories lack.  GTAV suffers from the standard syndrome of these Rockstar games where your characters don’t really seem to have motivations of their own, rather they just sort of blindly follow whatever instructions they’re given by the various NPC “quest givers.”  For many of these missions, I don’t even understand why the main characters would become involved, because they’re not really getting any benefit for themselves out of it.  The exception to that being Trevor.  I mean, Trevor is a psychopath, far worse than the other two, but he’s interesting in that he at least has goals of his own that he proactively works toward and doesn’t just reluctantly obey everything the various “quest givers” tell him to do.  He comes up with many of his own missions, and when he’s given a task by another party, he often just completely turns their plans on its head which results in major story ramifications.

Ultimately, GTAV is a good game mainly because it manages to be better than the sum of its parts.  It’s not an especially good shooter game, and it doesn’t tell the most interesting story.  I think this is the reason I gave up on Red Dead Redemption so quickly.  But with GTAV, I’ve come to appreciate that what you get with these games is really just an incredible sense of immersion that is unparalleled amongst the now crowded genre of open world games.