As the old year begins to fade into distant memory, we all take a pause to reflect on the passage of time and what we managed to experience and accomplish on the Earth’s latest spin around the sun.  In gaming, that usually means games of the year lists!  I have to say, there were a lot of great games released in 2015, and I’ve come to the regrettable realization that I just don’t have the time to play every game that I would like to pick up.  There were several big games that I didn’t manage to find the time for in 2015.  Namely, I’m thinking about Bloodborne, The Witcher 3, Soma, and Undertale.  I would like to think I’ll eventually get around to playing those games, but as I look forward, I see that 2016 also looks to have a lot of great games on the horizon, especially in the opening months of the year!  So I fear I might not ever really find the time to get back to those I’ve missed.

The existential regrets of a gamer aside, I’ve compiled a brief list of five 2015 releases that I really thought were highlights of the year.  They are listed in no particular order.

For a guy who grew up on classic Mario, Super Mario Maker was like the game I’ve been waiting all my life for, but I somehow didn’t realize how much I wanted it until it was here.  Having a vast and ever growing library of new levels in the mold of classic games like Super Mario Bros. 3 was a huge blast of nostalgia.  But what I found most impressive about the game was not the access to a huge collection of user-generated content, but how engrossed I became with the level editor, itself.  I had initially been somewhat worried that I wouldn’t have much inspiration to create levels, but everytime I sat down to create something, I found my imagination was immediately ignited.  It’s kind of amazing how quickly I found myself coming up with new ideas and twists for levels, and the sheer fun I found in creation ended up being the real draw to the game for me.  And the creative spark is incredibly well-facilitated as the level editor is amazingly easy and accessible to use, while still complex enough to grant the designer a fair degree of freedom to invent and experiment with entirely new ideas.

I also want to add that I’m really happy with the diligent continuing support Nintendo has given to the game.  A lot of my initial complaints have been solved in the many updates they’ve released which have made improvements like adding checkpoints and creating a better system to browse and discover new levels.

Here was another unexpectedly great horror game that released this year.  Until Dawn is not an action game like Resident Evil, but rather a story-focused adventure game, similar to Life is Strange or The Walking Dead.  Featuring a group of teenagers vacationing alone in a cabin in the woods, Until Dawn adapts the classic slasher film setup to an interactive story experience.  The story features a heavy emphasis on character relationships, and as the group’s situation becomes increasingly dire, we see the friendship of these characters put to a real test.

As the player guides the teens through a single fated night, the consequences of the player’s choices determines who lives and who dies.  It’s possible to do a “perfect” run where all the teens live, or they can all end up dying if the wrong decisions are made.  Ultimately, the number of survivors that make it through the night is less important than the player’s curiosity with how the story unfolds.  And for a video game storyline, I found it surprisingly refreshing.  Amongst all the terror, these characters have their moments of triumph, failure, redemption, tragedy, and affection, which I found made for a rich and standout experience amongst horror games. 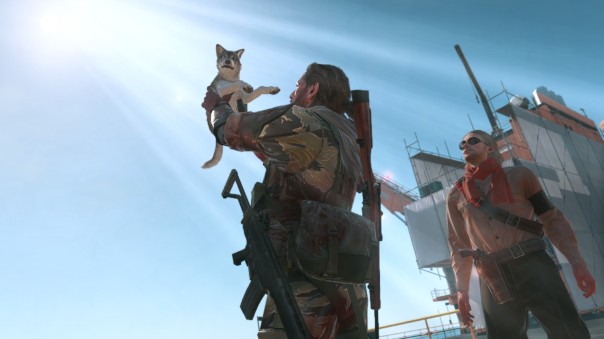 Before Metal Gear Solid V, I was a lapsed MGS fan.  I know it’s beloved by a lot of gamers out there, but MGS4 really rubbed me the wrong way and turned me off from the series.  MGS4 was a big step away from the series’ roots, moving from the top-down perspective of the previous games to a behind the shoulder viewpoint, and I don’t think they quite figured out how to make the stealth gameplay work under the new camera conditions.  And on the action side of things, the gunplay was really awkward and lacked grace and fluidity.  But where MGS4 failed in its attempts to evolve the stealth action that Snake’s adventures are known for, I think The Phantom Pain really succeeded.

With its sprawling open world, The Phantom Pain is a huge deviation from its predecessors.  What I admire most about MGSV is the freedom it allows the player in pursuing mission objectives.  I played this game after finishing the PC version of GTAV, and what struck me about GTAV was how restrictive it was toward the player.  At every point in GTA’s missions, the game has very exact instructions that it expects the player to follow.  MGSV, on the other hand, merely drops the player in a huge playground with a mission objective and gives them the freedom and toolbox to devise their own solutions to achieving that goal.

In some ways, The Phantom Pain doesn’t feel like an MGS game, which is why I’m very hesitant to call it the best of the series.  The gameplay is amazing and probably the best amongst its kin, but the story and characters are not as elaborate and interesting.  Many people feel that the story was probably unfinished due to the troubled circumstances of development.  Regardless, this game was just amazing to me and is a perfect illustration of the obsessive attention to detail that Hideo Kojima and his team are known for. 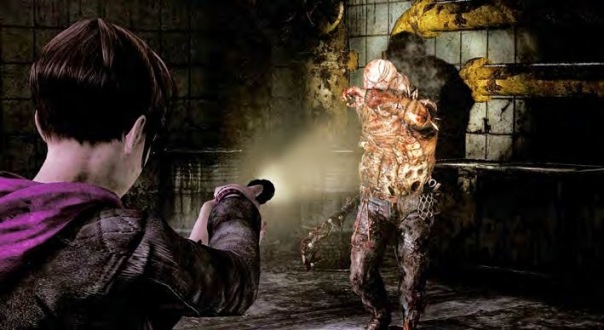 The original Resident Evil Revelaitons was a 3DS game that I thought was alright considering it was a handheld action game.  I don’t think it was a bad game, just not a particularly special one.  With that in mind, Revelations 2 was an incredible surprise to me.  While it still leans toward action, I felt it was much darker as a horror game than the previous two mainline Resident Evil games, which focus more on bombast than tension and dread.

Revelations 2 stars series veterans Claire Redfield and Barry Burton operating in parallel campaigns.  The player trades off control between the two characters at predetermined points in each of the game’s episodes.  Once again, the Resident Evil series partners the main characters with AI companions.  This time newcomers to the series Moira Burton, Barry’s daughter, and Natalia, a mysterious psychic orphan, travel with Claire and Barry respectively.  Unlike in previous games, the player can switch control between the main character and the partner at will.  While the inclusion of companions in Resident Evil has been highly derided by fans, I think Revelations 2 is the first game in the series to use them well from a mechanics standpoint.  This is because neither Moira nor Natalia use guns, but rather have special abilities that are helpful to Claire and Barry in combat.  For instance, the psychic Natalia can “see” things that Barry can’t, like invisible enemies and hidden weak points.

And finally, the secret ending is just badass.  They really did a good job making all the characters in this game compelling and enjoyable, and the ending is really a “hell yeah” culmination for all their struggles.

There’s no question that Nintendo is great at making multiplayer games.  I don’t know that there are any games that I’ve enjoyed as much with friends and family as Mario Kart and Smash Bros.  But nonetheless, I don’t think many foresaw just how successful their first foray into the world of online action games would be.  When Splatoon was first revealed, it piqued my interest (and made my highlights of E3 2014), but I really felt I was being cautiously optimistic.  Afterall, Nintendo had been great at making multiplayer games to play with real live human beings, but online competition had not yet been a serious focus of theirs.

But the success of Splatoon is not merely in Nintendo finally proving that it could compete in the arena of online gaming (when it wants to), but in the fact that it injects actual imagination and creativity into the rather stale world of online shooters. For better or for worse, Nintendo tends to go its own way and rarely walks in the footsteps of others, and Splatoon is a game brimming with ideas that are mostly entirely its own.  It was a huge breath of fresh air, and I really know of no other online experience which could be considered similar.

My only complaint with the game is the single player campaign.  I’m not saying I think it’s bad, as I did enjoy it enough to see it to completion.  (The final boss is a really fun fight!)  Rather, I just expected something a little more memorable coming from Nintendo, but I guess the real focus of the team had been on crafting such a superb multiplayer experience.