The announcement of the NES Classic Mini has got me reminiscing a lot about those old classic Nintendo days.  The games that immediately come to mind are titles like the Super Mario Bros. series, Rescue Rangers, Duck Tales, Duck Hunt, Zelda, Tetris, and so on and so forth.  But beyond the timeless classics, there’s a lot of games that I spent a ton of time with back in the day that mostly seem like they’ve been long forgotten.  I’m sure everyone has these games that they remember, but seemingly no one else does.  Especially when you’re a kid, you’re sort of at the mercy of what your parents buy you, and particularly in those NES days when adults didn’t know much about gaming, they really didn’t pay much heed to popularity or word of mouth when buying games.  I often found myself the recipient of gifted games that I felt I was the only person in the world who played.

There are two of those types of games that really stand out in my mind.  One is Dash Galaxy in the Alien Asylum, which might be the most existentially terrifying game I’ve ever played.  The other is the topic of today’s post: Mappy-Land.  Mappy-Land was developed by Namco and is the sequel to what I think was a slightly popular arcade maze game called Mappy.  Mappy-Land tries to do to Mappy what Super Mario Bros. did to Mario Bros., which is to take a simple arcade game with small discrete levels and turn it into a more long-form action-adventure game.

To understand Mappy-Land, it’s best to first give some explanation of its arcade predecessor, which was a maze game in the vein of Pac-Man.  Mappy is a police mouse tasked with retrieving objects stolen by a gang of literal cat burglars called mewkies.  The mewkies are a group of white cats led by Nyamco, the brown cat.  (Nyamco is a portmanteau of Namco and nyan, the sound a cat makes in Japanese.)  The game consists of Mappy being chased by the cats through their lair, a giant multi-floored mansion, while he collects the stolen goods in each level to advance.  Trampolines allow Mappy to ascend or descend between floors.  The catch is that the trampolines can only be used so many times in a row before they break, after which they become death pits.  These trampolines change color with each bounce, so it’s easy to know when they’re about to fail. 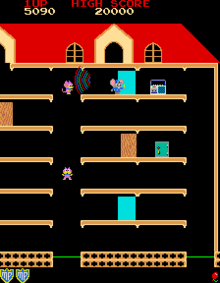 Mappy-Land follows a fairly similar formula but takes place over levels with more varied settings.  The goal of almost each level is to travel about a multi-tiered maze to gather specific collectibles (such as cheese or wedding rings) which will unlock the exit when all have been grabbed by the player.  Most levels consist of four tiered platforms that can be traversed using trampolines similar to the arcade original.  The mewkies are back to give Mappy trouble and serve as the game’s primary antagonists as they chase the almost defenseless mouse as he goes about his business.

The storyline of the game varies a bit through each of the game’s four worlds.  The common plot setup between worlds is that Mappy’s girlfriend/wife, the princess Mapico, sends the hero out on a quest to collect certain items to bring back to her.  So for instance, in the first world Mappy collects cheese to bring to her birthday, and in the second world, he collects marriage rings to bring to their wedding ceremony.  Each world features the same series of eight levels (which include settings like a train station, the wild west, a pirate ship, etc.), but the level layouts differ between each world. 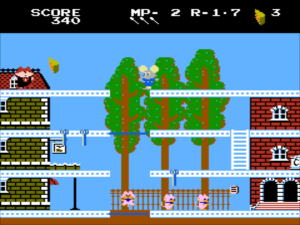 Two levels deviate from the maze-style of the rest of the game.  Those are the jungle levels and the graveyard levels.  The jungle levels are more standard platforming stages which require Mappy to jump over water pits, climb on vines, and make use of moving trampolines to reach hard to get items.  The moving trampolines are actually quite hard to work with and require very precise timing to land right, so I consider these levels to be among the game’s most difficult.  Meanwhile, the graveyard is the easiest.  These levels focus on fighting a horde of ghosts that haunt the sky over the cemetery and feature a balloon Mappy can use to fly.  Exclusive to these levels, Mappy has a flashlight that will kill any ghost that he can catch in front of him.  Since these levels have a weapon that can be used for defense, they tend to be by far the easiest in the game.

The final level in each world, called “Milky Town”, has two parts.  The first part takes place outside a castle, and Mappy can enter this building through the big doors in the middle when he has all the collectibles.  Inside, there’s another maze segment that features no enemies.  The goal in these areas is instead to get six collectibles and then meet up with Mapico who stands on a platform at the rightmost edge of the level.  The player fails if they don’t get all the items to Mapico before the background music stops or if they approach her without having collected everything first.  If one of these things happens, then the player gets a screen where Mapico absolutely lays into Mappy, berating him for his failure.  She apparently demands nothing short of perfection from her long suffering mate.  I always took these screens really hard as a kid.  To me, the music in this stage is something that even to this day conjures up a sense of panic due to the way you have to quickly and precisely rush through these levels lest you get greeted with Mapico’s fiery rage. 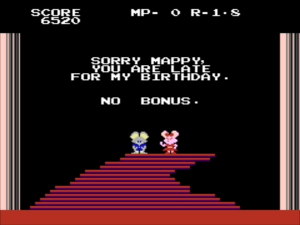 I’ve always enjoyed the weird personality quirks of Mappy-Land.  The music is genuinely catchy, and the backgrounds look nice for what they are.  In fact, my mom actually once called Mappy-Land beautiful, which is the first time in my life I think I heard someone compliment pixel art.  And despite the fact that Pac-Man is one of the most iconic games of all time, I don’t know of any other maze games that really managed to catch on.  I give a lot of credit to Namco for trying to meld the maze genre with the more popular action-adventure genre.

But Mappy-Land has always been something of a menacing and, in a way, sad experience to me.  The game was always kind of scary to me.  I think it’s because Mappy-Land is a game about being chased, and especially for a young kid, that creates a lot of emotional tension.  Pac-man is a game about being chased, but I never found it as heart-racing as Mappy-Land.  Maybe it’s because the power pellet allows Pac-man to turn the tables on the ghosts.  Mappy-Land has objects and traps that can be used to distract the mewkies, but they’re not nearly as effective or as empowering as the power pellet. 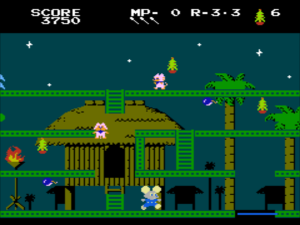 It’s a sad game because Mappy’s life strikes me as a living hell.  The mewkies are complete bullies who hound the poor mouse wherever he goes.  And his girl is probably even worse than the cats.  Mapico isn’t Princess Toadstool.  She’s no victim in this game.  Mappy’s arduous quest is entirely motivated by her greed and materialism.  And if he performs even slightly less than her extreme standards demand in the final level, she throws a merciless tantrum.  How many wedding rings does a woman really need to tie the knot!?!  How many pieces of cheese does she need for her birthday!?!  Mappy and Mapico’s entire relationship seems to be built around Mappy bringing her stuff.  Does she even love him?  The fear of a being stuck in a loveless marriage is not something I think a lot of young people think about, but even when I was just a small kid, this game actually disturbed me with thoughts about that kind of stuff. 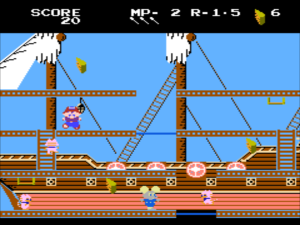 For the longest time, I believed that Mappy-Land was an original game.  It wasn’t until I messed around with one of those little plug-and-play TV games that had a bunch of Namco arcade titles that I realized Mappy had starred in an earlier game.  I suppose the poor mouse is just one of those long lost and forgotten mascot characters like Rocket Knight or Plok.  Mappy-Land was recently released on Wii U Virtual Console, and there have been a few obscure cell phone games released in Japan that are based on the character.  So I guess someone somewhere must remember this character.  Still, his lack of notoriety is somewhat endearing to me.  I kind of feel like Mappy is my thing, something that only I appreciate.  I’m sure other people out there have similar feelings to their own favorite obscure games or music or books or movies or whatever.  It’s comforting in a way.