Crash Bandicoot, the one-time face of Playstation, turned 20 this past week.  I’ve always found it curious that the long decline of Sonic the Hedgehog has been a popular topic of discussion, but the corresponding decline in quality of the Crash Bandicoot series has not received nearly the same amount of attention.  I’ve had a few theories as to why this has been the case.  First, Sonic *was* the Genesis.  When most people think of the good times they had with that machine, the Sonic the Hedgehog games are among the first things that enter their mind.  They are a symbol for an entire gaming era.  But I think when most think of the PS1, the experiences that immediately come to mind are titles like Metal Gear Solid, Final Fantasy, and Resident Evil.  Even though Crash was generally held up as the mascot of the Playstation, he was not nearly as critical to its success and popularity as Sonic was to the Genesis.  And furthermore, the decline of Sonic is sort of symbolic of the decline of Sega as a whole.  Once a major pillar of gaming, Sega fans have not only had to endure the struggles of one of their favorite characters, but it has corresponded to the waning of Sega’s particular brand of creativity as a whole.

While Crash was used by Sony as the mascot of the PS1, Sony never really owned the Crash Bandicoot brand.  Instead, Naughty Dog developed the game for Universal Studios’ game publishing arm (which is now defunct).  When Sony bought Naughty Dog to develop PS2 games, the rights to Crash didn’t go with them.  Instead, Konami worked with Universal to take the series multiplatform, and, similar to his hedgehog counterpart, that’s when trouble started to arise.  Now, after a long stretch of diminishing popularity with less than stellar releases, Crash is in the hands of Activision, who have shown little interest in getting the series back on track.  But I’ve noticed more and more over the past few years, however, there’s been a growing fan community that’s trying to convince Sony to take back the series and do it justice.

I’m a long time Crash Bandicoot fan.  The first game was among the titles I originally received along with the console.  As I’ve discussed before, the PS1 is my favorite console, and, as a result, Crash occupies a special place in my heart.  So, I’ve been in favor of the recent fan push to get Crash returned to the hands of Sony and hopefully start a subsequent return to glory.  It’s a long shot, and I know it’s very unlikely that we’ll ever see a new proper Crash Bandicoot game, but…whatever… you have to support what you love.

Of the original Crash games created and developed by Naughty Dog, I think my favorite would have to be the third game, Crash Bandicoot: Warped (setting aside Crash Team Racing).  I think the time travel plot made for the series’ most creative levels thematically, and while many prefer the levels in Crash 2, I’ve always felt they were a little soulless when compared to the settings that Crash 3 wanders through.  And I’ve also always thought it was an amazing game graphically for the original Playstation.  Crash Bandicoot always had great graphics, especially when it came to animations, but Crash 3 made use of vibrant colors in a way that just made everything pop better.  The final boss fight deserves mention as one of my favorites ever, as Crash faces off against Neo Cortex while also having to avoid getting steamrolled by a parallel duel between his shaman buddy Aku Aku and the evil Uka Uka. 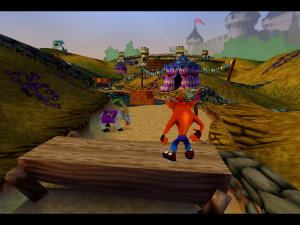 I also have to mention Crash Team Racing here, as it may be my favorite kart racer ever.  It’s certainly among my favorite games of all time.  In the arena of kart racers, the Mario Kart series basically sits high above all else from a quality perspective, but there has been a small few number of titles to challenge MK’s crown, and Crash Team Racing is undoubtedly one of them.  I would actually rank it above its N64 counterpart, as I think CTR has more interesting tracks and karts that handle better than the slipperiness of MK64.  I also think CTR just has way better visuals than MK64, but that’s a bit of an unfair comparison, since MK64 came out near the beginning of the N64‘s life, while CTR appeared at the end of the PS1‘s.

The fan movement to resurrect the Crash series hasn’t gone unnoticed by either Sony or Activision.  At E3, Crash was announced to be incorporated into the next Skylanders game, but far more exciting, a remake of the original Crash Bandicoot trilogy is in the works for Playstation 4.  There was also a major cameo by the character this year in a form that I won’t spoil here, but many of you probably know what I’m talking about.  These attempts by Sony to placate the Crash loyals have been incredibly amusing to me.  Most companies just ignore fan demands to revive old, dormant series.  Sony is oddly trying to sideways satisfy them by throwing out a few bones, but not actually doing what fans are requesting, which is an entirely new game.  Presumably, such a thing is on the table if the remakes do well enough, though.

But if Sony really were to do a new Crash game, what would that actually be?  Some seem to want a new game developed by Naughty Dog, but I doubt Naughty Dog is up to the task anymore of doing Crash Bandicoot, and I doubt they would want to.  A lot of talent from the Crash and Jak days have moved on from the company, and their current talent pool is more experienced with and seemingly more interested in creating highly linear, story-driven action-adventure titles than making a new 3D character platformer.  In fact, there aren’t really many studios outside of Nintendo that do have such experience anymore, but I can think of a few.  Namely, Sanzaru Games, who did a good job with Sly Cooper 4 on PS3, could be the best match for taking on the task of Crash.  I would also suggest Next Level Games, who did the Luigi’s Mansion sequel on 3DS, could also be a good fit.

And furthermore, what would a new Crash entry even be like?  In its original time, Crash straddled the line between two distinct eras of game design.  Ostensibly, Crash is a 3D platformer, allowing movement along 3 axes.  But unlike other similar releases of the time (like Mario 64, Banjo, and Spyro), Crash was structured much more similarly to 16-bit era games.  While the aforementioned contemporaries featured objective-driven gameplay in open, free-roaming levels,  Crash still had a focus on linear level design that tasked the player with making it from point A (the starting point) to point B (the finish line).  This made it a lot more similar to earlier games like Sonic the Hedgehog and Super Mario World than other comparable games of the PS1/N64 era.

Should a new Crash Bandicoot retain the linear-style of the originals, or should it attempt something more advanced, like the free-roaming environments of Mario 64?  My feeling is that most fans, myself included, would rather a new game be true to what Crash was at its peak.  But would this make the game feel antiquated?  Ironically, I actually think that more recent games like Super Mario Galaxy and Super Mario 3D Land show that linear level design can still be very exciting and modern.

Regardless of all these questions, I would definitely like to see Crash make a comeback.  Aside from the fact that I’m a huge fan of the originals, these kind of games just aren’t really made anymore, besides those featuring Mario of course.  And I think more than just being fundamentally fun, 3D platformers served an important function in the gaming world, as they were the gateway through which many young people became passionate about this hobby.  I mean, mobile games are fine and all, but I find mobile gaming to be a very limited representation of what games can be as a form of creative art and experience, and now more than ever, we need projects like Crash Bandicoot and Yooka-Laylee to capture the imaginations of young gamers who are otherwise glued to games on their phones and tablets.  In a world saturated with shooters and checklist-driven open world games, I really hope the vibrancy and inspiration of these carefree mascot characters can thrive again.