I guess I’m a fairly big classic Sonic fan going back to the games on Genesis.  It’s hard to say that because the series hasn’t been on a good trajectory since then, but I still think highly of those old games.  However, after a long wait, I’ve finally found a reason to be excited about Sega’s old mascot again.  Sonic Mania has basically beat all reasonable expectations and finally delivered something we’ve all wanted for a while: a classic Sonic game that not just evokes our memories of those old games, but builds on them in a meaningful way to move the series forward.

Sonic Mania bills itself as the true sequel to Sonic and Knuckles, ignoring the existence of Sonic the Hedgehog 4 that was released a little while back.  In practice, it’s not entirely a full sequel.  The game possesses a combination of remixes of old zones collected from the best of the Genesis games to brand new zones crafted specifically for Mania.   I will say the mix leans more toward revisiting older zones rather than newer zones.  I found that rather unfortunate as I hate it when game series start focusing more on trying to relive older content rather than moving forward with brand new stuff to experience.  (Final Fantasy has become an egregious offender of this.)  But, on the other hand, Sonic Mania does a good job at picking the best of those old levels to bring back with favorites such as Chemical Plant Zone, Oil Ocean Zone, and Hydrocity Zone.  Probably my least favorite zone is the one they start off with, Green Hill, which I just honestly think has become perfunctory and played out. 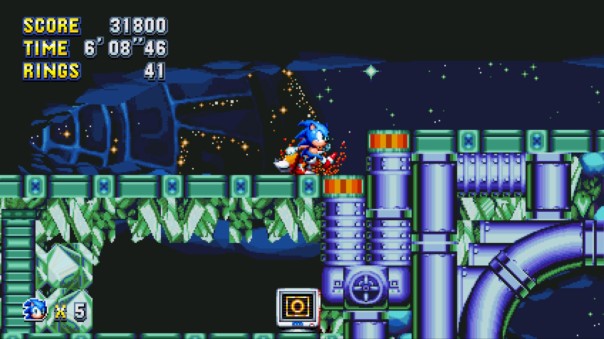 To be honest, though, as I played the game more and more, the fact that they brought back so many old zones started to bother me far less.  The levels in Sonic Mania aren’t mere facsimiles or even remixes of their Genesis counterparts.  They are entirely new interpretations of those levels which just copy the aesthetic design and some of the iconic elements of those levels.  Otherwise, the level layouts are almost entirely new and even feature new gameplay elements that were absent before, but still manage to mesh will with the theme of each zone.  For instance, Chemical Plant Zone now features pools of a gelatinous colored substance that bounce the player around based on their color.  Sonic can hit switches that drops chemicals in these pools and changes the color of the substance and the height of the bounce.  Really, I thought they just did a good job with breathing new life into these levels and not just overly relying on nostalgia to make them appealing.  And of course, the new zones turn out to be excellent additions, themselves.

One thing that really stood out to me in this game were the boss battles.  I think the old Sonic games always did a really good job at having exciting boss battles, and Sonic Mania continues the tradition.  It’s actually one of the few things that I think Sonic had over Mario at the time.  To be honest, I don’t think any of the 2D Mario games have had particularly interesting boss fight.  I think the Koopa Kids are cool as characters, but when you fight them, they’re always really simplistic.  Meanwhile, Robotnik always had really interesting and memorable contraptions to go up against.  Another thing is that I’ve always found that those boss fights made me appreciate how Sonic games used the collectible rings as a health system.  There is a ton of tension in those Robotnik fights when you find yourself down to one last ring and every time you take a hit you have to scramble to get that final ring/safety net back. 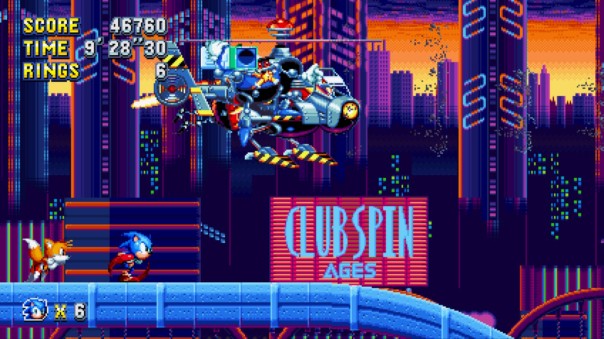 The music in Sonic Mania is really bang on.  Those old games always had great music, and Sonic Mania takes that legacy and just really steps it up.  It has great remixes for the old zones they’ve brought back, but also the new zones have amazing new tracks specifically composed for them.  Personally, I think the theme to Chemical Plant Zone is probably one of the top 5 video game tracks of all time, and the remix they put together for its appearance in this game is also amazing, although perhaps not my favorite remix of that specific track.  They’ve also brought back Sky Battery Zone from Sonic and Knuckles and I’m a huge fan of its background sound and the Mania remix, as well.  Of the new zones, Studiopolis probably has my favorite track.  The original soundtrack is something that I’ve been listening to separate from the game, and that is something I rarely do these days.  Unfortunately, they haven’t released the soundtrack for download or on Spotify, something I really wished they’d do.  Right now, I’m stuck listening to a SoundCloud playlist because that’s the only place I can find it.

(Just before I posted this, I found out that they had added the OST to the major digital music stores this week.  Unfortunately, Green Hill Zone and Chemical Plant Zone were removed due to presumable rights issues.  The lack of CP Zone is a huge bummer.) 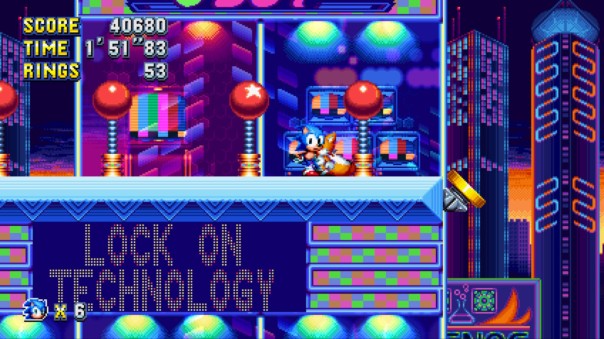 Sonic Mania is now probably my favorite Sonic game.  That’s saying a lot since I grew up with the Genesis games, and this newcomer must contend with the nostalgia of those fond gaming memories.  But to be honest, there are just parts of Sonic 1, 2, and 3+K that I just really don’t like.  There are specific zones and sections that I find I just really hate having to play through.  Like in the first game, I really hate those slow-moving platforms you must ride across the lava in Marble Zone.  I also really hate those elevator blocks in Spring Yard Zone that will kill you if you try to jump through them too soon.  Sonic and Knuckles has the tedious Sandopolis Zone, the only zone in the entire series where I consistently run out of time in, and Sonic 3 has those awful bouncy cylinders in Carnival Night Zone that I could never figure out when I was young. (I would literally spend minutes just mashing randomly on the buttons until I finally lucked out and got through those things).  Sonic 2 is probably the Genesis game I have the least complaints with.  In the case of Sonic Mania, however, I really think I enjoyed all the zones and acts the game had to offer.  It was a great experience from start to finish.