From the makers of FTL: Faster than Light comes Into the Breach, a peculiar kind of strategy game that is completely unlike anything I’ve ever played before.  In the far flung future, global flooding has left only four small islands as the last habitable land mass on Earth. Civilization continues on until a race of giant subterranean insects known as the Vek begin attacking the citizens of these new nations.  After a long war, the remnants of humanity are driven to extinction with the exception of the last squadron of mech pilots who open a breach in the timeline to travel to the beginning of the Vek incursion and relive the war as many times as it takes to secure the safety of mankind.

Each mission takes place on small, randomly generated maps that fill up an 8×8 grid of tiles.  The player is in command of a squad of three mechs that drop down onto each map and must defend cities from the onslaught of Vek emerging from underground.  Each mission requires the player to hold out and survive for roughly 4 or 5 rounds before the Vek retreat. As such, Into the Breach is really a strategy game that is more about defense than offense.  Whereas strategy games such as Fire Emblem and Advance Wars are mostly about eliminating all enemies in a given mission or capturing an objective defended by said enemies, there is no requirement to annihilate the Vek in Into the Breach.  Missions are failed only when a certain number of cities are destroyed. 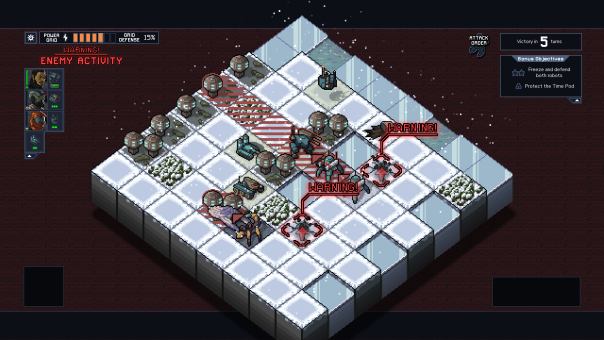 The acute scope and defensive nature of the game result in something that is a hybrid of puzzle and turn-based strategy elements. The puzzle-like nature of the game is strongly reinforced by the idiosyncratic way in which turns play out.  In most strategy games, the player and opponent alternate moving and committing actions with their units.  Not so in Into the Breach. Each round begins with the Vek moving into position and then indicating which tiles they plan to attack.  After this phase, the player is allowed to move and take actions with their mechs.  Following the player’s go, the round concludes with the enemies attacking the tiles they are targeting.

Since the player can see where the Vek are going to attack, they can effectively prioritize which enemy to focus damage on.  Essentially, the player has the opportunity to sabotage the Vek before they can do anything. The Vek that are targeting cities are generally top priority in most sound strategies.  The best thing about Into the Breach, however, is that the player is allowed to operate creatively in how they handle the situation. As an example, perhaps there is a Vek that is preparing to attack a city, and the player isn’t able to deliver enough damage to it to take it out this turn.  However, most mechs have weapons that have some sort of knockback effect, so you can use that to knock the Vek away from the target. That seems simple enough, but it gets even more elaborate. Perhaps there is already an enemy on the tile you’ve knocked the first Vek into. The collision will do damage to both Vek, possibly destroying both.  Or perhaps something even more interesting can happen, if there isn’t a second Vek already there. The first Vek is already committed to attacking the same tile relative to its new position. What this means is that if you knock the enemy 1 tile to the east, then the tile it’s targeting will shift 1 tile to the east. If there is an enemy on that tile, the Vek you moved will deal damage to this bystander.

The complex ways in which you can manipulate enemies makes Into the Breach feel like a puzzle game at times.  Beyond the knockback effect I mentioned above, there are a large number of unlockable mechs that have special abilities that lead to even more strategically interesting effects.  One of my personal favorites is a mech that can kick up dust storms on the tiles it attacks. These dust storms blind any enemy standing in them and render them unable to attack. This can be paired with another mech that confers electrical charge to all of the dust storms on the map, so anything standing in those storms takes damage each turn.

This is what really hooked me on Into the Breach.  Experimenting with the various mechs and their abilities and discovering the ways in which their abilities can augment each other keeps the game from ever feeling stale.  It is absolutely like a puzzle game.  There are times when I would be in a difficult situation, on the verge of hitting game over, and I would spend several minutes going through the various possible moves in my head until finally I would have an epiphany and realize a way I could save myself from the situation.  Of course, it’s immensely satisfying when this happens.

Like its predecessor, FTL, Into the Breach can be considered a roguelike game.  That’s a bit of a nebulous term these days, but in this case it means that if the player gets a game over screen then all their progress is lost, and they must begin the game from the beginning.  In the game’s story, this plays out as the mechs opening another temporal breach and time travelling back to the start of the war. I had mixed feelings about this when I started Into the Breach. In the past, I’ve really enjoyed games like this, including Spelunky and Rogue Legacy, but lately I’ve started to feel that this formula just isn’t for me anymore.  The issue is really that I don’t have as much free time as I once did, and as roguelikes make you replay a lot of the early content in the game many times over, I worry that these games really aren’t the best use of my limited free time.

Fortunately, I feel like Into the Breach managed to narrowly sidestep this concern.  There are a few reasons to which I attribute this. First, you reach a point where you can start on any of the game’s four islands.  Initially, only the first island is available to play, but once you beat that island, the second island will be unlocked in all future instances that you start the game over.  The same goes for the third and fourth island. Ultimately, you can play the islands in any order you please, and the final mission becomes available once you clear two islands in a given run (although there is a reason not to go the the final mission until three or four islands are cleared).  Each island has sufficiently unique mechanics that choosing a different island to start on each time keeps the game from feeling stale.

It also helps that there is a wide variety of unlockable mechs that promote experimentation each time the game is started from the beginning.  New squads of mechs are unlocked by completing special achievements in the game (similar to how starships were unlocked in FTL). Each squad comes with its own unique gimmick.  The squad that is initially available at the start of the game are the Rift Walkers and are fairly straightforward, focused almost purely on direct damage dealing and some knockback effects.  But then, for instance, there is another squad, the Flame Behemoths, that focuses on turning tiles into hazards by setting them on fire. My two favorite squads are the aforementioned Rusting Hulks, which are built around taking advantage of dust storms and electrical electrical damage, and the Zenith Guard, which make use of energy weapons that do chain damage to groups of adjacent enemies.  There is a good variety of strategy represented by the different squads, and I feel like everyone tends to find their own favorite. It’s also just fun to experiment.

Into the Breach has a unique approach toward difficulty and victory.  At the beginning of a run, a player chooses to start on any island they’ve completed so far.  Each time an island is cleared out, the difficulty is increased for the next island the player chooses.  After completing only two islands, the final mission appears on the map. The player can then proceed to this last mission or complete one or both of the remaining islands.  Thus the game can be won in a two, three, or four island victory. Since difficulty increases based on the number of islands cleared, the two island victory is the easiest to achieve, while the four island victory is hardest.

I’ve honestly never managed to beat this game’s predecessor, FTL.  I’ve made it to the final mission twice in FTL, and after the second time I realized that I would probably never be able to beat the game, simply because the final battle was so incredibly difficult.  Into the Breach has a far more attainable ending, and the final mission is not nearly as insurmountable. In a way, this was a relief, because it meant I could obtain some closure on the game, but I can’t deny that it also felt a bit anticlimactic compared to the awe-inspiring final boss of FTL.

I actually managed to beat the final mission on my first try at it while going for a two island victory, but it was still a fair challenge.  At one point, I was only a few turns away from victory, when I suddenly hit a wall. As I sat there strategizing, it suddenly dawned on me that every move I could think of would result in my team of mechs getting wiped out.  Since I couldn’t see a way out, I was almost ready to resign myself to defeat, when I had a better idea. It was really late that night, and I settled on simply saving the game so I could come back with a fresh mind in the morning.  (You can save at any point in the game and pick back up where you left off.) I came back the next morning, stared at the game for about 10 minutes, and then like a bolt of lightning, I was suddenly struck by a set of moves that would let me survive.  With my persistence rewarded, I only had to survive a few more relatively easy turns before I attained victory.

Since then, I’ve also managed to achieve a three island victory.  Someday maybe I’ll come back to try at a four island victory, but for now, I’ve set Into the Breach aside to move on to other games on my stack.  In my post about Hollow Knight, I discussed how exciting and rare it is to find a game that isn’t merely just good, but is something that I truly love and hold in high regard as one of the reasons I enjoy gaming so much.  Amazingly, I’ve played two games back-to-back this year, Hollow Knight and Into the Breach, that met this lofty standard. Years from now when I reflect on why I love gaming, Into the Breach will be one of the reasons. I think it’s that good.