The Inpatient is the latest PSVR spinoff from PS4’s excellent (non-VR) horror adventure game Until Dawn.  Unlike Until Dawn’s first spinoff, Rush of Blood, which was was an arcade action game more akin to The House of the Dead than the original Until Dawn, The Inpatient goes back to the series’ roots and focuses on story, dialogue, and exploration with scant action.  In The Inpatient, the player takes on the point of view of an unnamed amnesiac patient at Blackwood Sanatorium in the winter of 1952. I don’t want to spoil Until Dawn, so I’ll be speaking a bit vaguely here, but the events that transpire at the asylum during this time period play a major part in the lore of the series and are described in detail during the original game.  Thus, The Inpatient seeks to give a new perspective on the series’ backstory and serves as a sort of prequel.

I’m going to be blunt and upfront here: as a huge fan of Until Dawn (and also PSVR), The Inpatient was a big disappointment.  While Rush of Blood was an arcade shooting gallery that hugely deviated from the carefully-paced, story-focused trappings of its predecessor, I still think its a better continuation of Until Dawn than The Inpatient.  Rush of Blood had interesting and varied environments, a ton of cool monster designs, and despite a few irritating jump scares, was a more moody and frightful experience. The Inpatient, despite launching at double the price of Rush of Blood, feels like a low budget project, in contrast.  It’s an incredibly stripped down experience with few actual scares and a story that is dull and insubstantial. 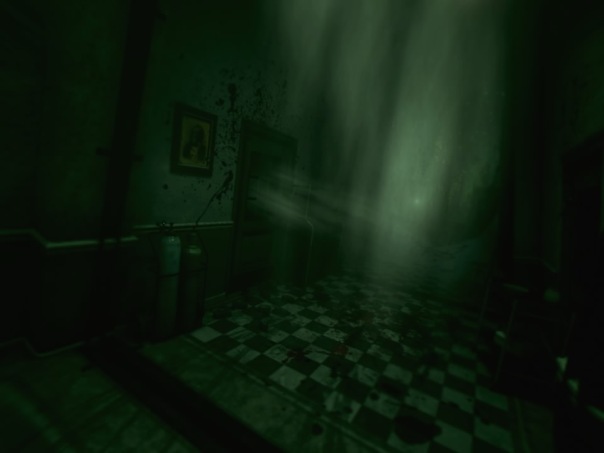 As a patient at Blackwood, the player spends roughly the first half of the game almost entirely confined to their room at the asylum.  Early on, a new roommate is introduced, and most of the time is spent having conversations with him. Unfortunately, he’s not a terribly interesting character, and I found all of these conversations rather unmemorable.  Eventually, alarms go off and chaos ensues offscreen, after which the main character and this roommate are left abandoned for days. Those who have played Until Dawn will probably immediately realize what has happened, but I can imagine those who are unfamiliar with the series will be completely confused.

During this segment, the player occasionally rests, only to enter a dream sequence where the player is left to wander the long dark hallways of the asylum as mildly spooky stuff happens along the way.  And when I say mildly spooky, I mean it. It feels like a really cheap haunted house. The worst scare of the game happens in the very first dream sequence when something randomly appears in front of the player, screams in their face, and then disappears.  Cheap jump scares like this are questionable design in normal games, but as I wrote about in my Rush of Blood review, they are extremely uncomfortable in VR.  This one was so bad that I actually reflexively ripped off the PSVR headset.  Strangely, this was the only jump scare I encountered during my entire playthrough, but the experience left me anxious (in a bad way) for the rest of the game.  I found every other attempt the game made to scare me to be rather tepid.

After a long boring period stuck in the room with Mr. Personality, the main character escapes their cell by way of…..something.  As far as I could tell, the story doesn’t even really attempt to give a real explanation as to how the main character gets out of the locked room, but nonetheless the player eventually finds themselves freely roaming the halls after they escape in a surreal dream sequence.  After the slow and lackluster first half of the game, one might be hopeful that it was merely building up to a more exciting escape from the grounds of the asylum, itself. Not so, however, as I felt the back half of the game was even more unfulfilling than the first.

After a bit of aimless wandering, the player meets up with a group of survivors who promise to take him/her back to a safe haven.  At this point in the story, the asylum should be overrun with bloodthirsty creatures, but the player only has one brief encounter with a monster.  The player basically spends the rest of the story following the other survivors through empty hallways and corridors while little else happens.

Toward the end, some (human) violence breaks out, and I could only assume this was an attempt to try to create some excitement for the climax, but I felt it completely fell flat at creating any tension or raising my interest in the story.  The ending, itself, felt extremely anticlimactic. The Inpatient has multiple endings which are the outcomes of various dialogue choices the player can make, but I don’t feel the game grabbed me enough for me to give it another playthrough.

Even for superfans of the original Until Dawn, I don’t think The Inpatient is a necessary experience.  It’s story simply doesn’t stand on its own, and it doesn’t really meaningfully advance the Until Dawn lore.  The outbreak at Blackwood could have been a terrifying event to witness, but everything exciting happens off-screen, far away from the player’s view.  This is presumably the end of Until Dawn as a series, and it’s really too bad that it ends on such a whimper.