I love Picross.  But I also kind of hate Picross.  Picross is Nintendo’s version of nonograms, a type of pencil-and-paper puzzle similar to crosswords or sudoku.  That might sound boring at first, but there’s something about nonograms that make them more interesting in video game form than crosswords or sudoku.  Perhaps it’s the Nintendo touch, but it might also be that the relative complexity of this type of puzzle makes it work better in an electronic format.

Picross starts with a square grid of unfilled tiles with each row and column bordered by a series of numbers.  The idea behind picross is that you fill in uninterrupted blocks of tiles in each row or column based on the numbers that line the grid.  So if a row has a 3 5 next to it, that means you need to fill in a string of 3 tiles followed by a string of 5 tiles with at least one unfilled tile in between these strings.  The trick is that the tiles you fill in for that row or column must be consistent with the requirements of the columns or rows that run through it.  The game is called Picross because each puzzle should make a crude pixelated image when the tiles are filled in correctly. 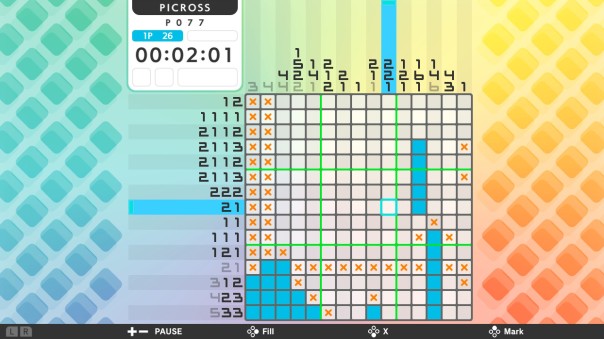 I think like most people in the U.S., I was introduced to Picross through Picross DS.  I have to confess something now.  I have a secret dark history with the Picross series, specifically, Picross DS.  There were a few weeks of my life that I was maybe a little too hooked on that game.  I would sit down after coming home in the afternoon and open up my DS and tell myself that I would only play for fifteen or twenty minutes, but before I knew it, hours would go by and the entire evening would have evaporated.   I would complete one puzzle and would tell myself, just one more!, and keep going and going.  I guess the dopamine rush I would get from solving each grid just made me not want to stop.

Eventually, I sort of triggered on the fact that spending so much time with the game was probably unhealthy.  I considered just throwing the game in the trash to deprive myself of the addiction, but I ultimately decided this would be wasteful.  I distinctly remember pulling the game out of the DS and sticking it back in its case and then burying it deep within my closet so that it would be hard to get to.  And with that, my obsession with the game just sort of dissipated.

Since then I’ve been more successful at playing new Picross games, although I haven’t played them all.  I’ve been able to avoid falling down the rabbit hole that I did with Picross DS.  But each time one comes out, I still get a little suspicious that it might make me fall into the old habit.  I especially liked Picross 3D and a few of the Picross e games that were released on 3DS.  Pokémon Picross I thought was interesting, but I’m not a big Pokémon guy and didn’t really feel the need to pay to unlock the full game.

The latest Picross game that I’ve hopped on board with is Picross S, recently released on the Switch.  Unlike games like Picross 3D and Pokémon Picross that attempted to inject new ideas into the series, Picross S is a fairly standard expression of Picross.   There are two modes, standard picross and mega-picross, each which I think have 150 puzzles a piece.  The standard mode is Picross according to its most basic ruleset, while the mega-picross mode changes up the formula by having hints that span adjacent columns or rows.  Mega-picross has been featured as a side mode in previous editions, but I think this game has the largest collection of mega-picross puzzles in the series yet.

To be honest, even though I’ve been a picross addict in the past, something about this version just wasn’t doing it for me.  The standard version of Picross just felt rote and boring.  I got fairly deep into this mode before realizing that I just wasn’t really enjoying it all that much.  My guess is that my lackluster feelings are more a result of me burning out on Picross and less a result of the quality of work they’ve done on this game. 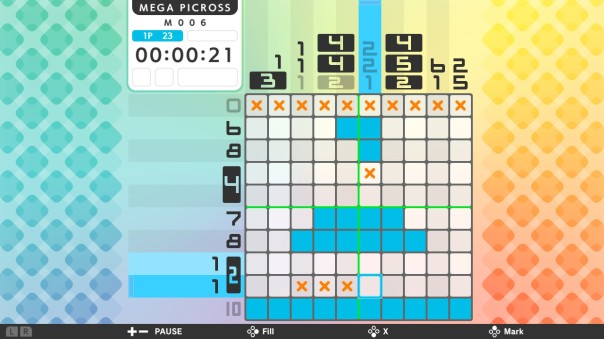 As the monotony of the standard mode set in, I turned my attention to Mega-Picross mode and……wow, I got more than I expected out of it.  Mega-Picross has been featured in some of the past editions, but I don’t think it has ever been given equal focus to the standard mode like it has in Picross S.  It’s always really been a side mode.  Personally, I’ve never really messed around with this variant of the game much.  I guess I’ve really just been too lazy to learn it. The new rules can be quite intimidating at first.  But after really taking some time to understand how it works, I could immediately feel myself getting hooked again like old times.  The new dimensions of logical reasoning this mode adds were a real shot in the arm for the Picross formula.

Picross S is a good package.  With just standard picross and mega-picross, it’s far from the most innovative or ambitious title in the series.  While other releases (with the exception of Picross 3D) were also heavily focused on vanilla picross, they did try to introduce new side modes and mechanics to experiment with the formula.  But Picross S fortunately makes up for its lack of adventurousness with just a lot of content.  I don’t think any of the picross games on 3DS delivered this many puzzles for $8.

Honestly though, I don’t think I’ll be going back to anything that is simply vanilla picross.  It’s just gotten old to me.  While mega-picross has been satisfying, I think it’s time they come up with another major reinvention of the game like they did with Picross 3D.  Hopefully, picross will see as bright of a future on Switch as it did on DS and 3DS, and we will see something revolutionary materialize.