I know it’s odd to start with a title that says “I don’t hate this game,” but it encapsulates my feelings about Mario Party 10 relative to what I’ve read from most other posters.  Let me start off by making it clear that I am not a huge fan of Mario Party games, which I think is where the disconnect with other bloggers comes from.  I haven’t really enjoyed the Mario Party games, because I just feel that they are too chaotic and luck-based for me to be invested in trying to win at them.  Defeat and victory feel entirely out of my hands, and, consequently, it’s hard for me to feel emotionally attached to the outcome of a game.  Within the series, I have by far the most experience with Mario Party 8.  I’m not clear if that game is well regarded amongst hardcore fans, but I’m not particularly fond of it.  I put a lot of time into it simply because Nintendo is almost the only company that puts serious effort into local multiplayer games, and, eventually, you need a break from Mario Kart and Smash Bros.

There are three modes in Mario Party 10:  Mario Party, which is the most conventional (although it is rather unconventional in the context of the series), Bowser Party, which is built around asymmetric multiplayer enabled by the Wii U gamepad, and Amiibo Party, which sounds like the perfunctory Amiibo content for the game.  I haven’t really played Amiibo Party, as it requires players to swipe in an Amiibo at the beginning of each turn, and that sound like a hassle.  I did enjoy Mario Party and Bowser Party a lot when I played it with friends and family over the recent holiday weekend.  Both of these modes feature the most controversial aspect of the game which is the car that all the players ride to communally progress through the board.  Basically, in this game, each board has a start point and an end point, and the players take turns rolling dice to move the car that they all ride in together as they advance toward the finish line.  When the car lands on a space with a special event, it generally only affects the player who rolled to get on that space.  Mini-games are triggered by landing on a mini-game space, or sometimes pop-up at random.

The Mario Party mode is probably what can be considered the most traditional mode of the game.  This mode pits all players against each other with the goal being to collect the most mini-stars before the car reaches the end of the board.  One interesting idea presented in this mode is that there are “boss battle” mini-games that occur at the mid-point and end-point of each board and consist of the players trying to do the most damage to a boss-type character.  I think this mode is probably the most controversial.  Many long-time Mario Party players feel that it eliminates the strategic element of Mario Party, as all players move together and there are no candy-type items that let players thwart each other.  I don’t necessarily agree with this point.  I have two main problems with past Mario Party games.  First, I have always found the games to be simply too chaotic and chance-driven for my actions to really make any difference in the final outcome of the game.  Sure it’s satisfying to nail another player with an item that steals their stars or coins. But in the end, I’ve always felt like all the random events that occur on the board go a lot farther to determine the victor than any strategy I try to effect or how well I played the mini-games.  When I lose, I feel cheated.  When I win, I feel more relieved than triumphant, since I know that the success had nothing to do with how well I played the game.  The other main issue I have with the Mario Party games is that they feel so drawn out.  Part of this is having to wait for your turn to occur and not being particularly invested in paying attention to the other players during most of that time.  I find that I really only care about what the other players are doing when they are about to potentially screw me.  The other part is that those games can be really gregarious, often interrupting the action to take time to elaborately explain every detail of what’s happening during an event on the board, presumably so potential new players aren’t left confused.

I think the car and the other streamlined aspects of Mario Party 10 go a long way to abrogating the issues I have above.  Overall, its a less complex game which works to its advantage, making it a breezier, more naturally-flowing experience.  Instead of characters having to keep track of stars, coins, candies/offensive items, and special dice blocks, there are now only really mini-stars and special dice blocks.  The mini-stars, which are necessary to victory, are generally only collected in straightforward manners, you collect them from winning mini-games or from special events that happen on the board. There are still plenty of opportunities to screw over other players, though (which is fun).  For instance, on one board, it’s possible for a character to get haunted by a boo if they pass through a particular space on the board.  The boo will then leech out mini-stars from the haunted player each turn.  Using special dice blocks, it is of course possible to set up the next player in the rotation to get stuck with the curse.  Unlike in previous games though, I feel events like these are less decisive, as mini-stars are far easier to collect than the stars in the previous games.  In the older games, one bad event can completely ruin you for the rest of the game.  Now, such turns of events are less discouraging, and after getting stung like that, its easier to resolve to make a comeback and get revenge.

The game also feels faster than its predecessors.  The announcements made during the game are more concise and don’t stymie the pace of the game.  In addition, the car mechanic made me feel more engaged during other players’ turns, as I would have to base my plans in the next turn around where they landed (since all characters move as one).

Some accuse this standard Mario Party mode as lacking the drama of previous games, as it is a much more light-hearted and faster moving affair than in the past.  I think that’s where the new Bowser mode comes in.  This mode is designed around the asymmetric multiplayer that Nintendo has always touted for the Wii U but rarely ever actually uses.  In this mode, four players work together to get the car to the end of the board, while another player using the gamepad chases after them as Bowser.  Bowser takes his turn after the other characters and is given four dice to roll so he has a chance of catching up to the team.  If Bowser catches the team, then that triggers a mini-game where the good guys fight Bowser.  In these mini-games, Bowser is on the attack through various means, while the Mario team tries to avoid taking damage.  Each good guy player has a set number of hearts that are lost when they take damage, and a player is removed from the game when they lose all their hearts.  (There are some events on the board that can bring dead players back to life, however.) 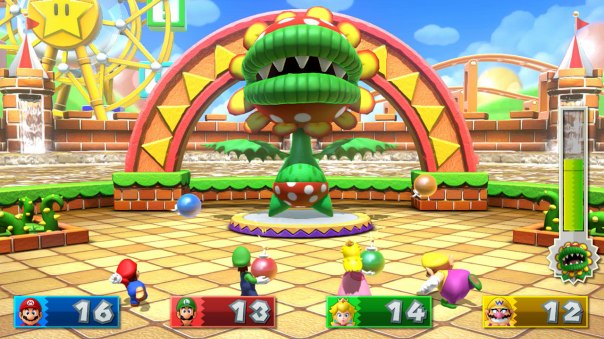 I think this is the real high-drama mode, because the odds seem to be very tilted in Bowser’s favor.  Hearts carry over between mini-games, and it’s generally easier for Bowser to take away hearts during those mini-games than it is for the other players to regain their lost hearts which generally requires landing on specific board spaces that are rather scarce and only provide a small number of hearts in return.  In addition, this mode is permeated by the theme that Bowser likes to cheat to win.  For instance, if the Bowser player doesn’t like their first dice roll on a given turn, Bowser Jr. allows them to reroll the dice to try to catch up to the team in the car.  These such advantages afforded to Bowser allows the classic bitterness and drama of the old games to surface.  Regardless, I still prefer it to the old games because of its heightened pace and straightforwardness.

Although I had fun with Mario Party 10, I say I don’t hate it, because I’m not necessarily overwhelmingly enamored by it either.  I feel it is a bit lacking in content with just 5 boards, only 3 of which are playable in Bowser Party Mode.  In addition, there’s no online play, so you need friends over unless you feel like playing against bots (who aren’t really all that good at the mini-games).  I don’t know why Nintendo is so averse to adding online multiplayer to Mario Party.  They justifiably have a bad reputation in neglecting online features, but they’ve made great strides with online in Mario Kart and Smash Bros.  Some people believe that Mario Party matches are too long for online play, and, consequently, most people will be tempted to disconnect if they find themselves losing.  But I think the new Mario Party Mode is fast enough and offers enough opportunities for comebacks that online play wouldn’t just devolve into a bunch of rage quits.  All those negatives expressed, I do want to say that I really like the mini-game selection this time around.  There’s a lot of diversity, and motion controls are used smartly and only in ways that actually make sense.

In the end, I think the $50 price tag might be a little steep for most people.  The evidence overwhelmingly seems to indicate that diehard Mario Party fans probably won’t like this game.  But if you’re like me, interested in something else to play on your Wii U with friends and family after you’ve burnt out on Smash Bros. and Mario Kart, Mario Party 10 might just be a fun diversion until you’re ready to go back to those far superior games.