Honestly, I’m kind of ambivalent toward of retro-obsessed gaming. And when I say “retro-obsessed gaming,” I’m not necessarily talking about games with pixel art aesthetics, as there are games that make use of pixel art but rely on fairly original gameplay design as opposed to being an evocation of a popular back-in-the-day title(s) (some examples that immediately come to mind of these fully modern pixellated games include Lone Survivor, Fez, FTL and Gunpoint). I’m really talking about games that are focused on being a throwback to the past, such as Volgarr the Viking, Scott Pilgrim vs. the World, or the recent remake of DuckTales. Some years ago when this phenomenon started, I was super excited for games like Mega Man 9 and Scott Pilgrim. Nowadays, when I find myself seeing games which promote themselves on retro-cred, I tend to just roll my eyes.

Maybe my distaste is just a matter of the novelty wearing off, but more likely I think it’s because this genre has become saturated with games which are more focused on obsessing over the old games the creator loved than actually creating a fun underlying game. Perhaps the worst example of this behavior I can think of is Retro City Rampage, the gaming equivalent of those awful reference humor movies that were hugely popular like 8 years ago. It is a game which makes hundreds of references to older games, such as Frogger and Teenage Mutant Ninja Turtles as well as ‘80s pop culture, but in the preoccupation with making so many references, the developer failed to create a game that was actually fun to play. And the references aren’t even particularly well-done, since it was never realized that references aren’t funny in and of themselves. There’s no subtlety or cleverness to the whole act, and it is neither funny nor amusing, but simply the game going “HEY, REMEMBER THIS? REMEMBER IT??? YOU’RE COOL ENOUGH TO KNOW WHAT I’M TALKING ABOUT AREN’T YOU?” The bad habit of lamely throwing out references just for the sake of throwing out references or trying to prove the developer’s gaming repute crops up in a lot of small developer titles, but that entire trend basically became crystallized in Retro City Rampage. On the other hand, one of my favorite games I’ve played this year was Volgarr the Viking, a throwback game which tries to capture the spirit of old sidescrolling action games like Rastan and Legendary Axe. (I’ve written more about this game here.) The team behind Volgarr successfully captured the essence of those games to make something enjoyable to play, while managing to avoid becoming fixated on nostalgia for nostalgia’s sake. My time with Volgarr has led me to believe that these throwback games aren’t just a novelty, but rather a legitimate approach to game design when handled competently.

This brings us to Shovel Knight. I initially wrote this game off because every time it was previewed before release, it seemed the developers were really tripping over themselves to name drop as many classic NES games as they could. But after its recent release, I heard some positive buzz from other players, so I decided to give it a go and hope for a Volgarr and not an RCR. Fortunately, I ended up having a blast with the game and in my mind it’s sort of the template of how throwback gaming should be handled.

Some background first, Shovel Knight was Kickstarted last year by freshman developer group Yacht Club Games and follows the sidescrolling action-platforming adventure of the eponymous Shovel Knight, whose quest takes him up against the eight rogue knights of the Order of No Quarter and their leader, the Enchantress. The game is sort of built in the template of Mega Man. The Order of No Quarter is composed of knights whose names all follow a convention of being titled “_____” Knight, where the blank is filled in with some sort of theme for that character which is reflected in the level they are fought. (Also notice that there are eight of them.) The levels also have a definite Mega Man feel to them, since each level has its own special gimmicks and features derived from the particular theme. Consequently, the level design has a sort of Mega Man “toughness,” since each level tests the player with its own unique challenges that must be mastered to progress. The other major game I see in Shovel Knight’s genetics is Zelda II. The game has an overworld map for selecting levels that reminds me a lot of Zelda II, complete with towns and side areas to visit in addition to the main Order of No Quarter stages. Shovel Knight can also bounce off of enemies using a downward strike similar to a move Link utilizes in Zelda II.

Yet despite the fact that you can clearly see the influences of Mega Man and Zelda in Shovel Knight, it manages to feel like an original game, not just a hollow mimic of some old beloved NES title. This is because, although it stitches together a handful of borrowed ideas from the classics, it differentiates itself in every other way. I’ll illustrate a few examples here: The levels are designed like Mega Man, but Shovel Knight is a melee-oriented character which alters the flow of gameplay. Like Mega Man, Shovel Knight can acquire new powers, called relics, but these are collected not from defeated bosses, but rather a hidden merchant in each level from which the knight can buy the relic. This makes rooting around for hidden rooms all the more important in Shovel Knight as well as collecting treasure for upgrades. (There are a ton of secrets in this game, which I like a lot, and it really goes toward capturing the NES spirit.) Also, the robot masters in Mega Man are all essentially just Mega Man with a different gun, while the members of the Order of No Quarter come in various sizes and with moves that are radically different from what Shovel Knight can pull off. (It’s kind of like the difference between Mega Man X bosses and original series robot masters.) These are just some examples of the ways in which Shovel Knight forges its own identity. 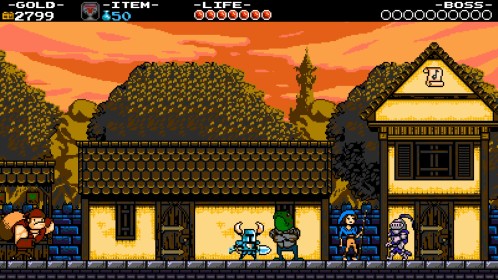 This is why Shovel Knight succeeds where so many are falling flat right now. Shovel Knight has influences, not references. It’s clear that the Order of No Quarter are creative descendants of the robot masters, the developer just lets that fact lie without needing to beat the player over the head with mentions and jokes about it. I never found a single bit of reference humor in the game, which means it’s either not there or it’s incredibly subtle. Shovel Knight honors its NES roots by utilizing ideas that were loved from those games, but it creates its own identity by uniting those borrowed ideas with its own original designs. It’s offering the spirit of its roots, not wearing the dead skin of them. Most importantly though, when synthesizing these ideas together, the developers of Shovel Knight actually paid attention to whether their game was fun or not, rather than simply relying on nostalgia to hook players. If you’ve never played any Mega Man or Zelda II, I really doubt you’d be held back from enjoying Shovel Knight on its own merits.

I think some developers feel that nostalgia is worthwhile on its own, but it’s really not. RCR, which offers nothing but nostalgia, was received terribly; while Shovel Knight has achieved fairly high acclaim. The problem is that I think a lot of gamers feelthey want nostalgia, and therefore it is a fairly good aspect to base a promotional campaign around. Before RCR’s release, a ton of gamers, myself included, were excited by videos showing pixelated graphics and missions calling back to TMNT, Metal Gear, and so on. But when the game was finally released, the realization hit that it was all style and no substance. The failure of RCR and other games marketed heavily on such nostalgia (DuckTales quickly comes to mind) has unfortunately resulted in a lot of cynicism toward this approach to game design. But as games like Shovel Knight and Volgarr the Viking prove, such an approach can actually result in games that are both a lot of fun and also really unique when handled by those who put creating a great game first, rather than trying to create shallow imitations of past glories.