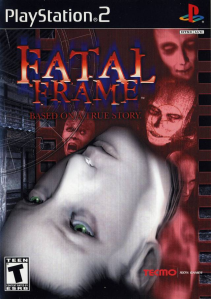 Fatal Frame may be the scariest game I’ve ever played. “Wretched” might be the best adjective to describe this game, as it oozes with an overpowering atmosphere of desolation, apprehension and dilapidation that is completely unique amongst the horror games I’ve played. Fatal Frame chronicles protagonist Miku Hinasaki’s terrifying investigation of the haunted Himuro mansion, a decrepit feudal Japanese castle that is the legacy of the depraved and extinct Himuro clan. In a classical horror fiction conceit, Himuro is in search of her brother who went missing during his own investigation of the sinister site. The main conceit of Fatal Frame (for which it is named) is the use of an antique camera, the Camera Obscura, to damage the malevolent ghostly denizens of the mansion by way of capturing the apparitions on film. 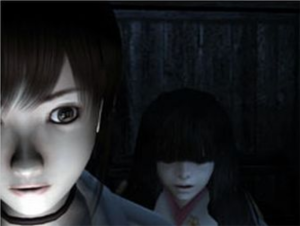 As I stated before, the most impressive aspect of Fatal Frame is the unrelenting atmosphere. Himuro mansion is in utter ruin but still intact enough to provide an ominous interior space that weighs on the player’s spirit. The mansion is musty, dark, and, as a result of its feudal origins, lacks windows in most of its rooms. These aspects create a feeling of unnerving isolation for which I know of no other comparison amongst the games I’ve played. The isolation is the key component in the tension that pervades the experience of this game. I’ve had some trouble getting through the game simply because I can only handle ~30-40 minute play sessions before the oppressiveness of it all just leaves me exhausted. I seem to remember this game releasing to rather tepid reception when it originally came out which leaves me utterly confused after playing through it now as it stands amongst the most horrifying games I’ve ever played.

Playing such an excellent example of a horror game makes me reflect on what actually makes for good horror in video games. I’ve always had a disagreement with a friend of mine over what actually makes a game scary. In his mind, he places a heavy emphasis on limited ammunition and encumbered combat. I, on the other hand, place focus on atmosphere and story. I think Resident Evil 4 is a good example that illustrates our differences. I find Resident Evil 4 to possibly be the scariest of the series. So many gruesomely dreadful locations and situations hang in my memory from that game, such as the initial assault at the village, the Regenerador lab, and the encounter with the Verdugo in the maintenance area. By contrast, my friend feels that Resident Evil 4 is the least scary of the series up to that point, as there is a relative abundance of ammo, healing items, and weapons which eliminates tension from combat. Personally, I don’t feel that such combat design really increases my dread in a game, perhaps because I’m always aware that I can just reload at the last save point if I die and therefore don’t perceive the same sense of danger.

This relates to Fatal Frame because, at least in my perspective, the game is least scary when you are actually under attack by a ghost. Combat with the ghosts is fairly simply. The ghosts float toward Miku, sometimes in unique patterns that the player has to adapt to, while the player tries to keep the camera focused on the ghost’s weak spot for as long as possible to build up the damage that will be inflicted when as shot is taken. If Miku is caught by a ghost, the entity just sort of shakes her for a little bit before it backs off. These experiences are not really all that frightening. The praise I give Fatal Frame is far more rooted in the dreadful atmosphere, aggressive suspense, the oppressive feeling of isolation, and the horrifying story that unfolds. Himuro Mansion is just a deeply discomforting place to walk around in, and the game keeps the player on their toes by sprinkling in some insanely creepy jump scares, cutscenes, and eery peripheral events.

In the end, I’ve been a little vague on specific examples of what makes this game work, but that is mainly because I want to avoid spoilers, as I feel this is a title any fan of horror games should seek out and play. It can currently be found in the PS2 classics selection for PS3 which is available via PSN, but physical copies can be found of the original PS2 and Xbox (the first Xbox 1) versions.

Recently, I picked up The Ico and Shadow of the Colossus Collection for PS3. For those who may not know, these two games form a sort of incomplete spiritual trilogy with each other and are products of Team Ico, a subset of Sony’s Japan Studio. Though gameplay varies a fair bit between titles, they both place a heavy focus on immersion through quiet aesthetic detail and minimalist gameplay. Having played through Shadow before, I’ve focused so far entirely on Ico, which was a completely pristine experience for me. I followed previews of this game pretty closely before its release, back when the PS2 was the hot new platform, but in the end, however, the PS2 original released during a time in which gaming fell away as a priority for me, so until now, I’ve had no experience with it.

Ico is much more of a puzzle game than its follow-up. For those who have somehow never heard talk of this game from its many enthusiastic fans, the setup for the game is that the protagonist (who I believe is named Ico) must help a princess-like character, named Yorda, escape a deserted castle, where she has been imprisoned by a dark queen. The game is mostly a puzzle game where Ico must figure out how to guide Yorda through a long series of environmental obstacles and ultimately find a way to open the castle’s gates. Occasionally, the pair will be ambushed by shadow creatures, and Ico must fight them off. Interestingly, there is no health bar for this side of the game; rather Ico must keep the monsters from successfully kidnapping Yorda to prevent game over. Regardless, Ico primarily feels puzzle-focused, with the combat only serving as a diversion. This is in contrast to Shadow which is definitely more combat-focused, although some would argue that the means of vanquishing each colossus has a puzzle-like nature to it. So essentially, Shadow is a combat-puzzle hybrid, while combat and puzzles form distinct segments of gameplay in Ico.

In a lot of ways, Ico feels ahead of its time. There was a long period when the term “puzzle game” meant something like Tetris, where pieces of stuff fall from the sky and need to be strategically arranged and eliminated to avoid the screen from filling up. Puzzle adventure games like Ico were very rare and not super popular. I can only think of one other example of such a game from this era which is Luigi’s Mansion, and that game was not especially well received. Eventually, the later releases of Portal and Braid would lead to a huge wave of puzzle adventure games designed by smaller developers, and the Tetris-based definition of the puzzle genre has mostly been supplanted. Ico even has the emotional, sentimental feel carried by a lot of indie puzzle games of this new ilk. By contrast, Shadow of the Colossus is a relatively unique game, focused entirely on seeking out and defeating a long series of bosses. It doesn’t really seem to fall in with any other movements or trends in gaming.

Ico and Shadow are some of the very few games I’ve played that actually manage to capture an adventurous feel to them, which is a feat considering that they are almost entirely linear. This is, of course, a result of Team Ico’s focus on gameplay in service of immersion. That is, the various challenges placed upon the player are only meant as a mechanism to bring the player closer to the characters and their desperate situation, a means of creating an emotional bond. This is not an adolescent empowerment fantasy as so many games are. Those sorts of games always feel more like a theme park ride, a sequence of vicarious thrills meticulously arranged to wow the player. Ico, on the other hand and despite its linearity, feels more like an expedition into an unknown world, akin to games like Fallout, Dark Souls, and the original Legend of Zelda. There is a grip of danger, uncertainty, and mystery in Ico and Yorda’s quest.

The mystery is a key component of this sort of immersion, I believe. Perhaps the PS2 manual provided more backstory, but the PS3 collection has a thoroughly modern manual, which is to say it is basically a short leaflet with not much more than a diagram of the controls. The cutscenes at the beginning of the game only provide a basic context of why Ico finds himself stranded in the dark queen’s castle. Consequently, we are left wondering about the circumstances of his struggle and the reality of the world beyond the castle. Importantly, our imaginations are engaged in trying to develop these details. When I find myself high up in the dark castle and gaze at the sea and forest beyond its walls, I ponder what could be out there. This rarely happens with other games for me, where, like a theme park, I never consider what is beyond the game’s walls, because I know that the world is only constructed as far as it needs to be. Of course, I rationally realize this is true of Ico as well, but the game provides a creative stimulation that still causes me to wonder.