System Shock Remake Has a New Demo and a Kickstarter

The previously announced remake of the original System Shock has just resurfaced with a new demo and a Kickstarter campaign.  I’m a huge fan of System Shock 2, but I’ve never been able to get far into the first game because it’s design has aged fairly poorly.  The demo is available via Steam, GOG, and Humble Store, and the links can be found on its Kickstarter page.  You don’t even have to donate to access the demo!  It’s great that this game is getting new found attention.  While it was a pivotal part in the early development of 3D gaming, I feel like most people know nothing about it, and if they do, they only know it through its more popular sequel. 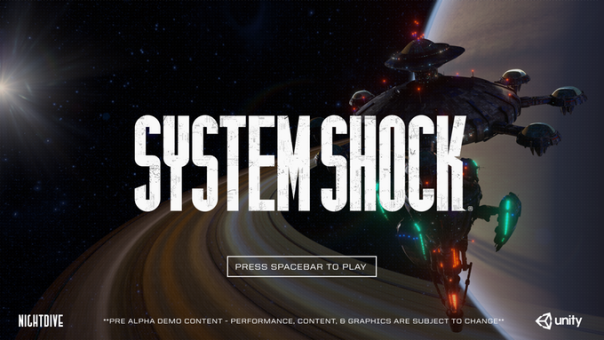 Aboard Citadel Station in orbit of Saturn, an experiment with artificial intelligence has gone awry, and the Sentient Hyper-Optimized Data Access Network, better known as SHODAN, that maintains the station now believes herself to be a goddess destined to re-engineer life and the universe.  She has turned against the inhabitants of the orbital colony, warping them into cyborg and mutant slaves, and has ambitions of annihilating humanity to begin her own ascension.  In System Shock, you play as the hacker responsible for SHODAN’s insanity and must overcome the horrors of Citadel Station as he (she?) desperately searches for a way to stop the rogue AI from launching an attack on Earth and the rest of humankind.  Released in 1994, the game was an early mix of FPS and RPG and had a heavy focus on player immersion.  If you’ve ever played a first-person game that focuses on storytelling through environmental exploration, you have System Shock to thank for that.  The game is also an example of a pre-Resident Evil atmospheric horror game, although it rarely gets credit for that.

System Shock was the team at Looking Glass Studios’ follow-up to the Ultima Underworld series that they had created years earlier.  Ultima Underworld was a first-person action RPG set in the Ultima universe and featured many of the key elements of System Shock, namely a focus on immersion, exploration, and allowing the player to discover multiple solutions to a given obstacle.  Ultima Underworld, itself, is also incredibly important to the history of gaming, as it was the evolutionary link between grid-based/turn-based first-person RPG dungeon crawlers like Wizardry and real-time first-person action games like Wolf3D and Doom.

System Shock had a number of high profile projects that were in some ways its direct descendants.  Warren Spector’s Deus Ex was heavily based on the ideas of immersion and exploration that were pioneered by his work on System Shock and Ultima Underworld.  System Shock 2 was released in 1999 by Irrational Games and is widely acclaimed as one of the greatest PC games of all time.  In 2007, Irrational would later use System Shock as the template for its biggest hit, BioShock.  And I’ve heard rumors that Dead Space was originally meant to be System Shock 3 (which is easily believable if you’ve ever played the two series).

With all the HD remakes and re-releases that come out these days, I have difficulty thinking of a game more in need (or more deserving) of the treatment than System Shock.  While it’s both important and influential, its UI and control scheme are incredibly antiquated.  The game predates such things as WASD and mouse look.  Today, these issues are notorious of early 3D games, but they are exacerbated in System Shock due to the game’s level of complexity.  The remake’s Kickstarter promises big improvements on this front.  To me, this would be a really valuable achievement.  While System Shock 2 has achieved a legendary status in PC gaming, I think the original System Shock has been held back from being as fondly regarded due to how obtuse it is to play for modern gamers.

The remake is being overseen by Night Dive Studios, a company whose main mission has been to procure the rights to classic PC games so that they can be re-released on digital storefronts like Steam and GOG.  A while back they managed to rescue both System Shock 1 and 2 from legal limbo and re-released the original versions of those games for sale.  I’ve heard that back in the day Looking Glass sold the rights to the series to an insurance company to keep EA from getting control of it, and Night Dive was able to successfully negotiate the re-releases of the game with that insurance group.  Other classics that Night Dive have gotten re-released include I Have No Mouth, and I Must Scream, The 7th Guest, Turok, Shadow Man, and the old Humongous adventure games among many others.

Night Dive is promising that the remake is being built from the ground up and will feature numerous improvements and tweaks.  They’ve even gotten the original voice actress to reprise her role as SHODAN.  The demo is currently available from Steam, GOG, and Humble Store and is a good exhibition of their vision.  I’m excited for this project, because, while I’m a huge System Shock 2 fan, I’ve always been a bit deterred from playing the original due to the issues I’ve discussed above.  Hopefully, this project will meet its crowdfunding goal, not just for the sake of this remake, but also because there’s been talk of an actual System Shock 3 in the works, as well.