Spooky’s Jump Scare Mansion by Lag Studios is the next game on my Halloween playlist.  As an avid enthusiast of history, you, the player, decide to embark on a mission to explore a local abandoned mansion whose past is shrouded in mystery.  Upon entering the abode, you are greeted by the gal ghost Spooky, who challenges you to survive all 1000 rooms of her haunted lair.

The layout of the massive titular mansion is procedurally generated.  The player is tasked with overcoming 1000 rooms in the house, and a little counter exists at the top of the screen which keeps track of progress.  The house is mostly composed of a limited set of pre-designed rooms which are put together in a random sequence that changes each time the player starts up the game.  Because there’s a much smaller number of these pre-made rooms than the 1000 total, you’ll see a lot of them repeated over and over again across the course of the game.  There are certain specific rooms, however, that always appear at the same spot in the overall sequence.  These rooms are usually considerably more elaborate than the others and serve to give some story to the game and usually set up the appearance of a new monstrous resident of the mansion.

The monsters of the game, called specimens, are the source of the adventure’s challenge, along with the player’s nerve to move forward.  When specimens appear, they give chase to the main character through the randomized rooms of the mansion.  It’s not the most complex game, and often it is pretty easy to outrun the various specters.  They doggedly pursue you from room to room, but will stop after predetermined points.  Things get a little more complicated later in the game, as there are certain tricks the player needs to figure out to escape the more advanced specimens.  Eventually, the player also gets a weapon of dubious effectiveness.

The story in SJSM is rather minimal and exists purely to provide flavor to the haunted adventure.  The Jump Scare Mansion and its mistress possess a mish-mash of chilling horrors and flippant comedy.  Despite being home to some truly evil supernatural entities, the mansion sometimes feels like an elaborate practical joke.  Spooky comes off like a juvenile prankster who has assembled the horrific deathtrap not out of prime malevolence, but more for her own dark yet frivolous amusement.  In addition to the more elaborate story-centric rooms I described above, little snippets of story tend to emerge here and there.  The player can find bits of text, like notes left behind by other foolish trespassers, and occasionally, Spooky, herself, will come out to interact with the player for a short bit.  But otherwise, there’s not much of grandiose plot behind the game.  All of these little story bits exist merely to enhance the mood and atmosphere. 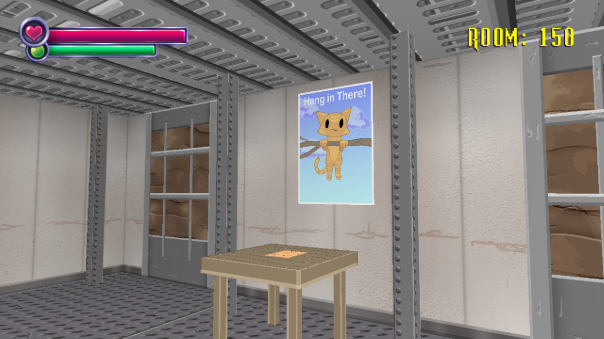 Despite the fact that the game is built from a fairly small set of simple rooms strung together by procedural generation, I felt like it still managed to be highly effective at creating atmosphere and tension.  Much of this was due to how the game continually subverted my expectations.  For the first several rooms, you are faced only with goofy pop-out haunted house scares, until you meet the first specimen, a fairly uninspired creature which only slowly gives chase.  But from then on out, the specimens become increasingly disturbing, and eventually the game began to challenge the “rules” by which I thought it worked.  There were times I felt like I was safe, only to be desperately alarmed to find out otherwise.  Eventually, even during the down periods in which there were no monsters present, I felt constantly uneasy, because I realized anything could happen at anytime.  By keeping the player on their toes in this way, the designers were able to create a level of tension and suspense that I felt was highly effective.

It’s often said that the fear of the unknown is the greatest fear of all.  It might be a trite saying, but I find that it is especially true with games.  I’ve noticed in SJSM that the scariest parts of the game are when there are no active threats against the player.  It was those times when there was nothing chasing me that I began to psyche myself out while waiting for the next monster to dreadfully appear.  When the monsters finally did present themselves, I found my stress rapidly dropped off, since I could more rationally assess the threat.

I often find people say that video games can’t be scary, because the player can just reset to the last save point if they die, and thus there is no real danger to be fearful.  That point isn’t really wrong, but I think it misses a huge element of video game horror.  The true horror of video games, like the true horror of any fiction, comes from withinside the player, themselves.  It’s the dreadful anticipation of what might be lying around the next corner, the internal struggle of the player against their own imagination of the frights to come, that makes us terrified when we otherwise have no rational reason to be.  In reality, I think the monsters are the least scary part of any horror game.  Rather, it’s the atmosphere which creates true tension and dread in these games.

Despite its simplistic gameplay and primitive Doom-like graphics, I found Spooky’s Jump Scare Mansion to be a great horror game.  It’s not the most elaborate game, but the setting and atmosphere really make up for it.  I haven’t even mentioned the best part yet, which is that the game is free on Steam.  And with such unsophisticated graphics, it’ll run on even the most basic PCs, so I encourage everyone whose interest I might have piqued to give the game a try.